To improve the quality of your browsing, cookies are used on this site for statistical and marketing purposes. By agreeing, click on the "I Agree" button or navigate further. You can cancel your consent at any time by changing your Internet browser settings and deleting saved cookies.

Paintball –  sportive technical game for teams with the usage of pneumatic markers for shooting crumbly  gelatinous balls filled with paint, soluble in water.  During game that lasts 10-15 minutes, two teams starting from the bases in opposite sides of the field try to eliminate the biggest possible amount of adversaries. Player is eliminated if there is a spot of paint bigger that 5 cent coin on him or on equipment used by a player; or if the player crosses the border of the field.

For the safety each player must wear a mask on his face and head; all markers are regulated in a way that speed of ball does not exceed the safe speed. Playing-field may be covered, open or forest ground with the natural or artificial shelters for players. 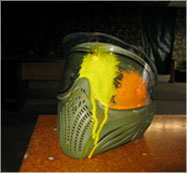